Hebrews 4:13 –
Nothing in all creation is hidden from God’s sight.
Everything is uncovered and laid bare
before the eyes of him to whom we must give account.

Proverbs 15:3 –
The eyes of the LORD are everywhere,
keeping watch on the wicked and the good.

Jeremiah 16:17 –
My eyes are on all their ways;
they are not hidden from me,
nor is their sin concealed from my eyes. 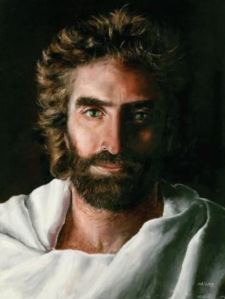 The global elite, who worship Lucifer, have been “broadcasting” through the Rothchild-owned Thompson-Reuters News on BING, that Obama was chosen as their “anointed one”. 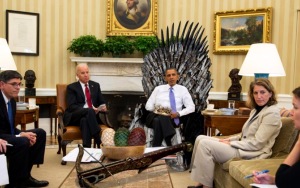 Furthermore, they have also broadcasted their intended use of Islamic subjugation, to help usher in the New World Order, to utilize CERN to open up the gates of hell and the coming delusion of “aliens” (which are demons/fallen angels) . . . ALL with Obama having a KEY role in their New World Order plan. 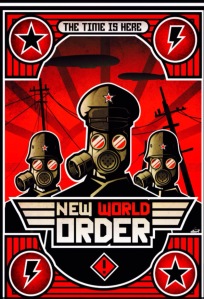 OK, pick up your jaw off of the floor, put on your spiritual hazmat suit (Ephesians 6) and let’s head into some really murky Luciferian, global elite waters to uncover their demonic plans.

I’ll pause here and repeat myself from other posts: THIS IS A DIRECT WORD FROM THE LORD: 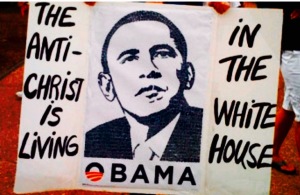 The Antichrist is the same entity as the Islamic “THE MAHDI” or “THE 12th IMAM” . 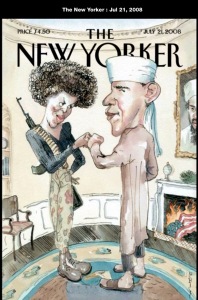 Before we go further,  let’s say a prayer:

Father, I lift up this information to YOU, may the POWER, POWER, POWER of the Holy Spirit completely cover this information, preventing ANY demonic forces, or their human minions from stopping what You want to release today. I pray for You to release the Angels of TRUTH, PEACE, SALVATION and DESTINY to go forth and protect ALL who read this post. I pray for YOUR full will ONLY to be done in every area. I apply the blood of Jesus over all communication systems, electronic systems, internet connections, electricity and all equipment associated with accessing this information. I pray for the Holy Spirit to prepare the hearts of all who read this post, to have “eyes that see” and “ears that hear”, that the truth may be clearly seen. I pray for this to be HIDDEN from all dark forces and NO weapon formed against this shall prosper, but BACKFIRE onto any who attempt to cause harm. We thank you, LORD, we PRAISE you LORD and we ask for all this to be done, in the MIGHTY name of Jesus, Yahshua. Amen and AMEN!!!

Ok, let’s go . . . Keep the full armour on and those prayers going up.  PLEASE, take this all to the LORD in prayer for confirmation.

What started all of this is the continued appearing of this creepy photo on BING News; it kept showing up frequently, throughout the weeks and months. Bear with me for a moment and I’ll show you several of these, taken over the course of months . . Both the blown up image and the original image, located in BING News (screen shots are from my iPad). 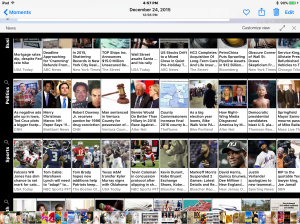 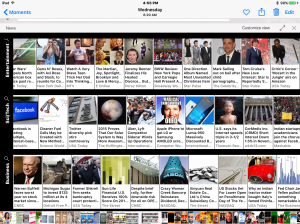 CAN YOU SEE WHAT I’M TALKING ABOUT?  CREEPY!!! Right? 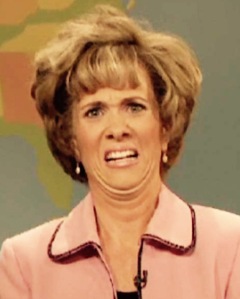 As the weeks and months progressed, I continued seeing these creepy photos, show up on unrelated news items. When I clicked on the news item, that photo went away. 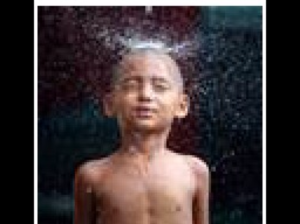 I would keep commenting about these creepy photos to Dave, then one day about a week ago, I finally showed him one of these CREEPY PHOTOS and He said, “that looks like a young Obama with horns” . . . . OH MY. . Light bulb moment . . The “ah-HAAAA” that later sent me into research. . . But more occurred before that. 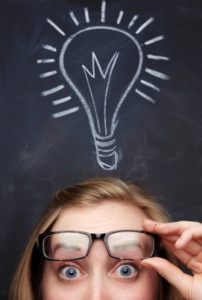 Oh lookey, I found a photo of the bouncing baby Bama . . . Let’s put that next to the creepy photo. Baby Bama is a bit younger here, but can you see him in the older creepy photo. . . With the water splashing on his head and what looks like horns?  See the resemblance? Look at the Obama ears.

OK, let’s move on. . . Are you doing ok so far? Here, have a piece of chocolate, take a breath and let’s continue.

I watched Jonathan Kleck’s video (below), where he was reviewing information he put together about Obama, including the SUBUD cult his mother belonged to and he belonged to. There “just so happens” to be a SUBUD cult location in these 3 related places: INDONESIA . . . CHICAGO. . . HAWAII . . . Hmmmm,

While viewing Jonathan Kleck’s video, I saw the SUBUD logo: 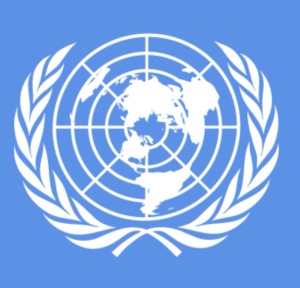 OH IT GETS EVEN BETTER!!!! Check this out:

I noticed the wheat that goes up the sides of the United Nations Flag, reminded me of some of the Islamic flags I have seen. . . Then when I did a search on that. . . . LOOK WHAT I FOUND. . .

IT’S THE OFFICIAL ISLAMIC EMPIRE FLAG, WITH THE WHEAT UP THE SIDES!!!  (Psssst . . . I didn’t know there was an “Islamic Empire Flag”, did you?).

As I did some more searching, I found this “interesting” photo of the bouncy baby Bama a bit older. Check out that necklace around his neck. Here’s the “original” photo shot and the enlarged photo of the necklace.  I changed the coloring on the enlargement to bring clarity: 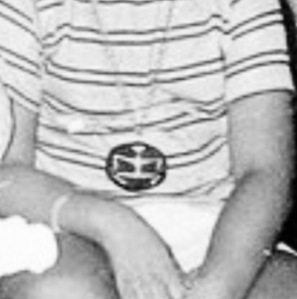 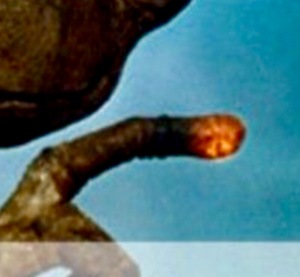 OK. . . Ready to wrap this up?  I’ll keep it really simple:  Can you see the thread of logic to all of this Luciferian diabolical “broadcasting” of their plans?

1) Obama is “the one” they have chosen to usher in their Luciferian agenda to control the entire world.

2) The United Nations will utilize Islam and the underlying occult SUBUD to usher in “the NEW WORLD ORDER”.

Revelation 9:1-4 – Then the fifth angel sounded, and I saw a star from heaven which had fallen to the earth; and the key of the bottomless pit was given to him. He opened the bottomless pit, and smoke went up out of the pit, like the smoke of a great furnace; and the sun and the air were darkened by the smoke of the pit. Then out of the smoke came locusts upon the earth, and power was given them, as the scorpions of the earth have power. They were told not to hurt the grass of the earth, nor any green thing, nor any tree, but only the men who do not have the seal of God on their foreheads. 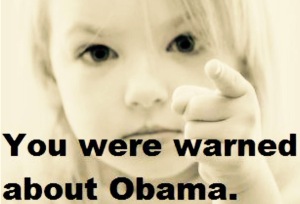 HERE’S THE GOOD NEWS: THE HEAVENLY FATHER SEES ALL THAT THE EVIL PEOPLE HAVE PLANNED AND HE IS REVEALING IT TO ALL WHO HAVE “EYES TO SEE” AND “EARS TO HEAR” WHAT THE HOLY SPIRIT IS REVEALING. . . TAKE ALL THIS TO THE LORD IN PRAYER . . . LET HIM CONFIRM TO YOU. . . “IS THIS THE TRUTH?” 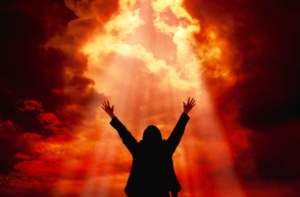 WHAT TO DO NOW:

Make sure your relationship is CLEAN and STRONG with the LORD JESUS. HE IS COMING BACK FOR HIS BRIDE, who loves Him and is in love with Him.

Daily ask the Holy Spirit to search you and show you any area that is unpleasing to Him. REPENT where you must repent. . . FORGIVE all who have sinned against you. READ YOUR BIBLE DAILY. PRAY like never before. AND HANG ON TO JESUS . . . THERE ARE DEMONIC STORMS BREWING AND ONLY IN CHRIST JESUS, WHOSE HEBREW NAME IS YAHSHUA . . . WILL THERE BE PEACE.

RESEARCH INFO (OR “LOTS OF STUFF”)

Inside the Obama (Who’s Your Daddy) Conspiracy Theory
http://www.thenationalpatriot.com/tag/mohammad-subud/

SHOCKER! Loretta Fuddy – The cult of SUBUD – Barak Obama and his REAL Father? 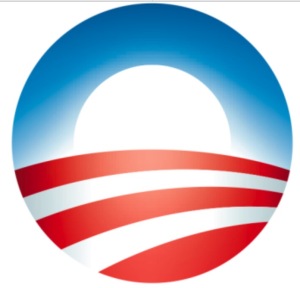 Jonathan Kleck – When the Sun Rises Over the West, the Beast is Unleashed

(Islamic Prophecy about “the Mahdi”) – One of the signs of the last day is near: the sun will rise in the west.

DID the lying pedophile prophet Mohammad, of the satanic system of Islam, get busted by Archeology?

PROOF Allah is Satan: From the Words of Mohammad

Obama Admits He is A Muslim 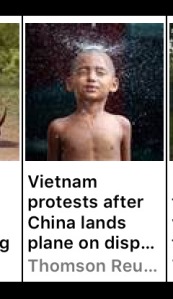 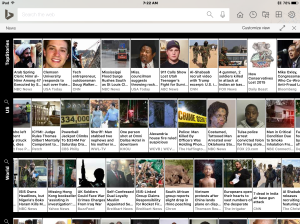 1-8-16 – THE FOLLOWING ARTICLE TRULY ADDS MORE INFO TO THIS POST:

Here’s the video in the above article:

Here’ another “CREEPY PHOTO” . . I hope I’m making my point by now (you can even see it’s a screenshot from my iPad . . I didn’t edit that out of this photo): 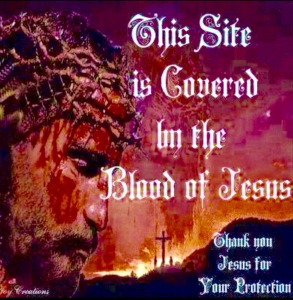 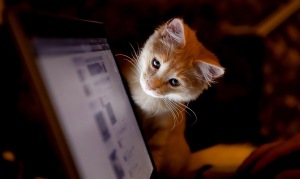 ANY ADS LOCATED ON MY BLOGS ARE NOT MY CHOICE, NOR DO I ENDORSE ANY OF THE THEM. . . I have a free account from WordPress, which may place ads of their choosing on my posts. I suppose it’s a good example of “you get what you pay for”. Currently “free” is all I can afford, but THANK YOU JESUS, I’m able to do this at all.